The Effect of Family Separation on Children's Health & Development 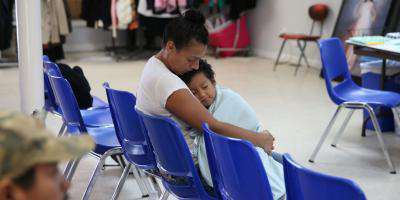 Two weeks ago, President Trump signed an Executive Order to end the separation of parents and children affected under his “zero tolerance” immigration policy. This came after enormous political pressure, from the public and from politicians on both sides of the aisle. President Trump stated he, “Didn’t like the sight or the feeling of families being separated.”

While the order seems promising, many questions surrounding the logistics of the change remain unanswered. Suddenly ending the practice of the separation will face both legal and practical hurdles. President Trump did not directly address the 2,300 children who have already been separated. Kenneth Wolfe, a spokesman for the Administration for Children and Families, initially said “There will not be a grandfathering of existing cases.” This statement was later then redacted by Brian Marriott, Senior Director of Communications for the agency; who said Mr. Wolfe had misspoke and that the “reunification is always the goal” and they are awaiting further guidance on the matter.”

Since then, 522 detained immigrant children have been reunited with their guardians while 2,053 more are still in custody of the Department of Health and Human Services. The responsibility of handling all of this is actually split between the Department of Homeland Security, the Department of Health and Human Services, and U.S. Customs and Border Protection. CNN reports that, so far, no federal agency has been designated as the main keeper of parents’ and children’s data and whereabouts. This means that the process of reunification is tied up in a complicated, messy web of bureaucracy between different government departments. Immigrant parents and their lawyers have reportedly had a very difficult time just locating where their children are, exacerbated by the fact that many children are taken to detention centers hundreds of miles away from their parents and phone access is limited.

The mental health and development of the children involved is of critical importance. “Those kids inside who have been separated from their parents are already being traumatized,” said the Democratic senator Jeff Merkley, of Oregon. Dr. Colleen Kraft, president of the American Academy of Pediatrics, corroborates this sentiment stating, “Children can suffer irrevocable, long-term trauma even from a short-term separation from their parents.”

Kraft explains that the trauma results from the kind of stress these children are put under. There are two kinds of stress: positive and toxic. Positive stress is very short-term in nature. A perfect example of this would be a child’s temper tantrum. “What happens in their body and in their brain is that their inflammatory markers, their fight-or-flight hormones, rise. And then in the presence of an adult who can be caring and comforting, they fall and they're redirected, and the brain actually becomes resilient from that type of stress interaction,” she says. “And we know that only happens in the presence of a loving and caring adult for a young child.”

Conversely, the separation of children from their parents creates a toxic stress, which brings about those same fight-or-flight hormonal reactions. But this time, the stress can cause long-lasting damage. “Without that parent to help buffer that reaction, these chemicals go on to destroy the architecture of that child's developing brain,” Kraft says. “They destroy the synapses that occur that result in the ability for that child to love, to learn, to develop. So separation even for a short time is something that's toxic to a child's developing brain.” This kind of toxic stress can cause developmental delays that affect speech and language skills, gross motor skills, and can even reflect characteristics of the autism spectrum.

Alisa Geffner, a family and divorce lawyer representing Geffner Kersch, attests to the developmental significance that can occur in children with these kinds of interruptions in their lives. “In our field, we see the adjustment a child has to make when their parents become separated. The drastic and often sudden disappearance of a family member can cause serious trauma.” She explains that when parents have allegations against them, even if they are untrue, they are forced to be separated from their children until the court proceedings are resolved, which only adds to the potential negative impact.

Carolyn Kersch, a partner of the same firm, adds, “Many times, these kids are the same ones coming back into the courts because of juvenile issues.” PINS cases, or Persons in Need of Supervision, are when a child under the age of 18 “ does not attend school, or behaves in a way that is dangerous or out of control, or often disobeys his or her parents, guardians or other authorities.” Kersch notes that it is often the children who have suffered some kind of trauma growing up which turns into this kind of troublesome behavior later in life.

For this reason, Geffner and Kersch are big proponents of co-parenting. This entails both parents getting along for the betterment of their children and their children’s healthy growth & development. Not only can this limit the negative effects of a divorce, but it can actually create an even more positive situation than what came before it. When adults remain in an unhappy or toxic marriage, a negative and stressful atmosphere is created in the house hold. With co-parenting, the parents can provide the opportunity for both parents to spend time with their children, focus on their mutual love for their children, respect each other without animosity, and overall maintain the positive support structure that is so crucial in a child’s development.

If you are in need of a dedicated team to help navigate family separation, Geffner Kersch in Garden City, NY has the the expertise to help you transition to the next phase of your life.

The information on this website is for general information purposes only. Nothing on this site should be taken as legal advice for any individual case or situation. This information is not intended to create, and receipt or viewing does not constitute, an attorney-client relationship.